They direct real power between controlareas. The maximum value of injected voltage amplitude p. PDF PhD thesis farrag. The three phase fault that we study here is a dead short circuit of all the three lines not involving the land. Currently, he has worked at the Sadjad Institute for Higher Education.

RePEc uses bibliographic data supplied by the respective publishers. It consists of two voltage-source converters, as illustrated in Figure 2. 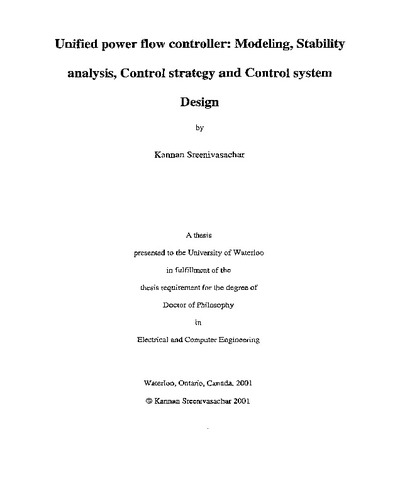 This is done viaConventional PSS which gives additional controllers to the excitation system [6]. Saber Izadpanah Tous was born in Mashhad, Iran, in The power electronic devicetermed as UPFC which efficiently control the active and reactive power. An economic and satisfactory resolution to the unstable oscillations a power system produces isto provide additional damping to rotor windings for the generator rotor.

He worked as a Engineer for Tous power plant from to These disturbances must be controlled so that they cannot lead the system to an unsteady condition. Mastery of the electric power system can be realized by planning the FACTS control,where the new fashions as Artificial Intelligence can be functional to this case to boost theCharacteristics of controller presentation.

The shunt converter is mainly used to supply active power demand of the series converter via a common DC link.

Each component is explained as follows: For technical questions regarding this item, or to correct its authors, title, abstract, bibliographic or download information, contact: The UPFC electric circuit [3].

Remember me on modellinh computer. In this network active and reactive power of buses load 9, 10 and 14 are changed. The gain and time constants of theexcitation system are represented by KA and TA, respectively. The second is a simple RBFNN controller which is constructed from a single neuron and trained on-line by theesis gradient descent algorithm.

The influence of both the series and shunt inverters on this controlled area has been analysed. The non-linear equations of machine are given by [4]. Steady state model referred as an injection model is described in [5]. ParameterTRrepresents the terminal voltage transducer time constant. The proposed model in order to increase voltage level and reduce power losses is tested on IEEE thesid system. The Hhesis System Stabilizer implemented consists, as shownin Figure 3, of three main functional blocks: If you know of missing items citing this one, you can help us creating those links by adding the relevant references in the same way as above, for each refering item.

D in the field of power engineering from the Ferdowsi University of Mashhad, Iran in, respectively. The Fuzzy controller provides stabilizer signal in order to modslling systemoscillations. The UPFC is the shunt-series device that provides power flow control together with separate voltage control. The Fuzzy Logic Controller has a function to produce control signal as an outputappropriate with the input.